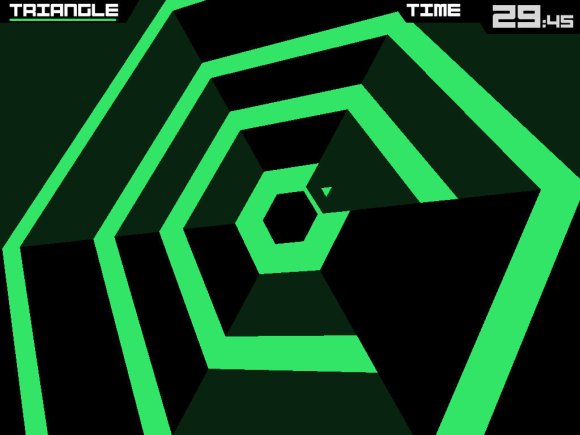 Entrancing. That’s how I’ll describe the style of Super Hexagon, the latest action game from indie developer Terry Cavanagh. The game moves at an incredibly fast pace, challenging the player to navigate a small triangle through a maze of oncoming rectangles and trapezoids, and survive for as long as possible. The color palette consists of bright neons, morphing from green to pink to blue in sync with the movement of the maze. The musical score, written by chiptune artist Chipzel, is upbeat and perfectly timed with the game’s motion. The result is a game you play with your whole body, dancing to the rhythm of the music as you attempt to survive for sixty unending seconds.

The trance-like element is heightened by the game’s quick restart mechanism. When we lose the game, we can start over instantly just by pressing space bar, without pausing for any sort of loading screen. Furthermore, the game is completely devoid of narrative or purpose. This makes the act of dying somewhat irrelevant, since there is no in-game mission to fail, and allows the player to stay immersed even as she restarts again and again. The clock resets to zero, but playing Super Hexagon feels more like a single continuous session than a series of individual rounds. And this desire to keep trying is especially important, as it will take most players hundreds of tries to solve even the easiest of it’s six stages.

But what’s most innovative about Cavanagh’s game is that he orients the camera into the style of the gameplay, making it more entrancing and immersive. The images on screen spin rapidly, zoom in and out and agonizingly change speed and direction without warning to the player. While this movement doesn’t change the physical actions necessary to survive, it forces the player to be even more focused. As the difficulty increases, the game moves faster, and the camera twists and turns even more dramatically. By utilizing a frustrating, challenging and counter-intuitive camera, Cavanagh has built on the game’s immersive qualities while making the game more difficult to master. The camera is our worst enemy in Super Hexagon, and it’s also what makes it such a great game. 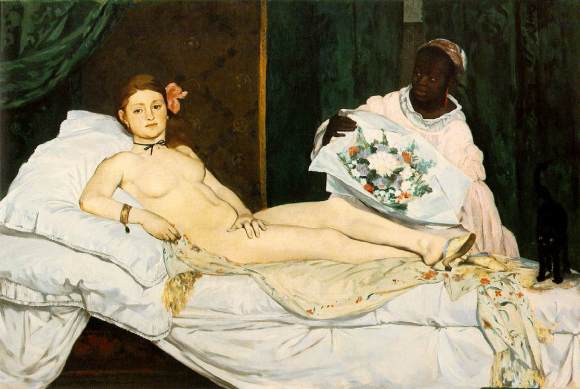 In the past, the camera was something designers tried to hide. A great camera was invisible, unnoticed by the player. A bad camera could be enough to ruin an otherwise stellar game. Here, the camera is being repurposed, intentionally made noticeable to hinder the player’s progress and build the entrancing state of the game. It’s a bit like Edouard Manet, utilizing the thick black outline in Olympia and declaring to his contemporaries that the hand of the painter can be visible in the finished product. Cavanagh is introducing the camera, a new tool for designers to use to enhance the mood of the games they create.

2 thoughts on “Repurposing the Camera in Super Hexagon”